Yanxes is a famous adventurer who Silver in disguised herself as.

Silver disguised as Yanxes first appears with Albra after helping Keel and co. with a monster. They explain that they are going to kill a monster named The Bird of Paradise that has been poisoning a hot spring. After fighting the Bird of Paradise, Keel decides that he is joining the Bird's side. All of a sudden The Bird of Paradise reveals herself as Crem. Keel then explains that it is Albra and Yanxes that are doing it. Albra then sucks Keel and Lavi into a Gord. After they Albra and Lavi escape they start fighting . Albra and Yanxes reveal themselves as Gold and Silver.

Albra and Yanxes show up and beat up some guys trying to attack Lavie,they are then attacked by Keel. When they explain that it was someone disquised as them. They are later partners for the Adventures Eight Cup and pass the preliminaries which was a swimsuit contest. 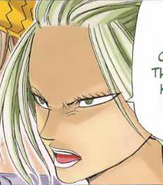