Toutan is a Double Mouth and a member of Ayakashi. He was teamed up with Banpaa.

Toutan has two mouths wear his eyes should be and a giant eye wear his mouth should be. He has green hair and purple and red tattoos. Toutan also wears black and white jacket.

Unlike Vamper, Toutan is more calm and doesn't get as mad if someone insults him (unless its Vamper). He usually has to calm Vamper down if he gets mad.

He revealed he joined Ayakashi in plans of making of world for monsters showing his concern for his own folk. A great example is when he was willing to do battle against Kurokiri who is one of the four strongest monsters in the world.

Sometime before the series he joined Kurokiri Setsuna's group the Ayakashi and was paired up with Vamper. He first appeared with Vamper trying to steal the treasure of the Addams family. He ends up fighting Keel while Vamper fights Blue with both of them being advantageous first. As the battle progressed they reveal they are members of group know as Ayakashi and have the goal of finding the Four Sacred Treasures. However, since no one knows how the treasures look like they are ordered to retrieve every treasure in the world. Keel fights Toutan again and come out victorious but then Vamper tells them he is stronger than Toutan and is about to defeat Blue, but is defeated himself. After Vamper loses they get back up trying to get the treasure but when Keel and Blue say they can still fight so they decide to leave. Though it turns out Toutan heard Vamper and starts to chase him.

He later shows up at the Ayakashi meeting, where he tries to calm Vamper down when he gets in a fight with Silver.Kurokiri then comes in and tells them to continue searching for the treasures.

Vamper and Toutan later appear in the desert, where they wake up Keel who had earlier passed out from exhaustion. Toutan and Vamper collaborate with Keel in getting into Necropolis only to fall through a trap door. The two of them along will Keel fall into the same room as Lavi, Blue, Mippy and Bone where they fight against a jack-o-lantern monster. The monster reveals that he holds one of the Four Sacred Treasures. Toutan then realizes that the monster is none other than Jack of the Shikyou. Toutan, Vamper, Blue and Keel combine forces to try to defeat Jack only to lose by the powerful monster. After Mippy manages to defeat Jack, Vamper flies everyone out of Necropolis with his ability. Toutan wakes up with only the thought of returning to meet with Kurokiri.

Toutan is seen at the Ayakashi headquarters where he ask Kurokiri what the "Banquet of the Gods" is. During the conversation Kurokiri tries to change the topic numerously but Toutan keeps asking him what it is. Toutan tells Kurokiri that he joined the organization to make a world for all monsters and says that if Kurokiri is planning something else or more dangerous then he will fight him immediately. With this both Kurokiri and Toutan starts to stiffen up to fight, with Vamper secretly watching in fear of what the two are going to do. Kurokiri then decides to stop and tells Toutan when the time comes he will tell him. Toutan the cries out that Vamper should stop sneaking around and walks away as well. 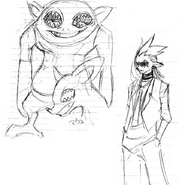 Retrieved from "https://busterkeel.fandom.com/wiki/Toutan?oldid=6491"
Community content is available under CC-BY-SA unless otherwise noted.