Stately Heartful is the father of Lavie Heartful.

Stately is a man with black hair and a black mustache. He wears a white suit and a tie with hearts on it. 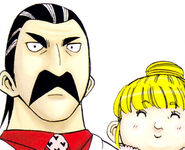 As a child he read about the Instrument of God. So Stately became a adventurer when he was 15 and lead a group of four. But all three of them died before they reached it. Stately still blames himself for their deaths.

He has hearts all over his clothes, which has to do with his last name Heartful.