Shiro is a White Dragon and Judy's monster.

Shiro in his human form is an old, slim man with glasses, mustache and long white hair. When he was young he didn't have the mustache and was very handsome. He dresses in white shirts and ties of the same color. Besides human, he can appear as a hybrid and gigantic, white dragon. The more of a dragon he is, the more power he can use. 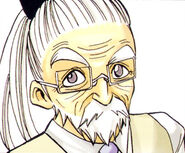 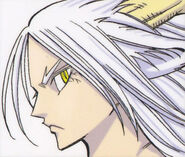 Shiro is a kind man who can read hearts. During the time he traveled with Judy he fell in love with her.

He can turn into a dragon and when he becomes a dragon, his physical capabilities increase and he can also alter his size when he is a dragon. He is also capable of shooting big waves of fire from his mouth and capable of flight.