Pannacotta is the Chief of the Shiton's Adventurer's Guild.

She prefers to be called madame showing that she might have quite some pride. She is easily angered by somethin perverted or rude.

Pannacotta has the appearance of a elderly woman who is a little overweight. Her hair is tied into three top knots and she has a mantle with fur on the top of it. She wears a big lipstick, earings, a necklace that has her badge and a dress that shows some cleavage. She is seen smoking a pipe. When she was younger she looked similar other than the fact that she was slimmer. 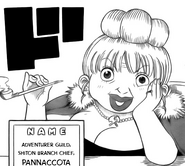 Pannacotta and Gomeji used to be a couple but something happened that ended it. Pannacotta might have been a warrior type seeing how she has an axe as her necklace.

She hasn't been seen in combat however seeing how she is chief and also a warrior she might be formidable as a fighter.