Mizaru is a member of Behemoth.

He has white and black hair. He wears something over his eyes since he is blind.

Mizaru is the cruelest of his teammates using dirty tactics to win.

Enhanced Hearing: Since he is blind his Hearing has increased. His hearing is so good that he can hear some ones heartbeat.

He along with Kikazaru and Iwazaru were all orphaned monkey's that were taken in by some woman. One day

she saw an orphaned Keel so they adopted him. And from his and his two brothers perspective Keel supposedly killed her.

He first appear with his team after Lavi returns home. Stately wouldn't answer any question so he cuts him. Blue shows up and hits Kikazaru and Iwazaru. Mizaru notes how strong Blue is so he holds Stately hostage, while Blue was distracted Iwazaru grabs him from behind. 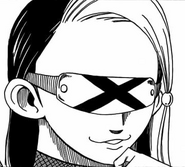