"Kurokiri" Setsuna is a member of the Shikyou, the leader of the Ayakashi, as well as the one responsible for murdering Blue's mother. "Kurokiri" (literally meaning "Black Cutter") is not actually his name but a title which refers to his unique ability to store multiple black swords inside his body.

Kurokiri is a pale-skinned man of average height and lean build, his right eye being covered by a black eyepatch with a white dot at its center. His remaining eye possesses a white iris with a red sclera. He has pointed ears and long stringy reddish black hair. He also wears a gloves, a long sleeve red shirt, a black scarf, a black fedora and a black cloak-like jacket with white flamelike patterns on it's endings.

Kurokiri is a very serious and cold person who, apparently to Banpaa, doesn't tolerate failure. However, this might not be true because both Banpaa and Toutan were perfectly fine when they were seen again. Kurokiri takes his fights seriously and sometimes he even enjoys them as though they were a game. He also has a form of respect as he acknowledged how powerful and beautiful Blue's mother was. He also has a distaste for monster users, especially Judy.

Prior to the current events Kurokiri was one of the Shikyou and participated in the "Great Evil 4 Battle." While he was young he constantly fought Shiro and Judy. Decades later Kurokiri set his eyes upon the annihilation of the Suiki Tribe. Unfortunately, he did not expect to lose one of his eyes to Blue's mother.

Currently, Kurokiri was confirmed to be a leader of the group of monsters called "Ayakashi". He ordered the members to go out and search for all the treasures in the world in hopes of finding the 4 Sacred Treasures.

Kurokiri's first appearance was when the Party met Shiro for the first time who also had one of the Sacred Treasures. By himself he fought and subdued the Party and Shiro altogether in a battle.Blue and Keel then worked together and were able to push Kurokiri back. However, he wasn't defeated but merely injured and was ready to kill everyone but, Shiro intervened and told him to leave with the Treasure and let them live. Kurokiri refused and said that he could merely kill them and then retrieve the Treasure but, Shiro the resorted to his strongest form and was willing to kill everyone including himself if he wouldn't retreat. Given no choice he decided to retreat with his subordinates and the Treasure. Before he left Shiro asked him "What is the Banquet of the Gods?" Kurokiri merely stated that he should "Just enjoy the time for the feast to come." 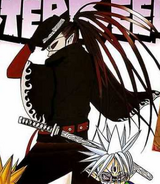 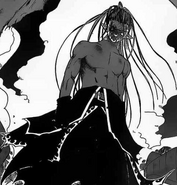