The King Lizard is the king of all Lizards.

He looks very similar to normal Lizard Man with the excetpion that he has a clubbed tail and that his head seems to make a crown indicating his king status.

He hates it when people intrude in his forest and seems to boast of himself higly.

When Keel, Ravi, and some guards went to look for the Boss Lizard the King Lizard attack them. He started to beat them and none of their attacks worked. Then Keel out on the ring and got his Dragon Ape Arm and easily defeated the King.

The King Lizard is an A-Class monster who could only be defeated by Keel with his Dragon Ape Arm. 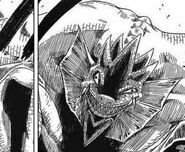