Keel is the main protagonist of Buster Keel. He is an Adventurer and the fighter of Buster Keel along with Lavie, Mippy, and Blue. He is a Dragon Ape who was turned into a human and is looking for Siva to change him back. He is a student of "Kokushi Musou" Sarah.

Keel is a Dragon Ape with the appearance of someone in his late teens.

In his human form, he has apricot skin, spiky bright orange hair, amber eyes and an intricate black tattoo on both of his arms. He also has slightly prominent canine-like fangs.

He wears a sleeveless, open white vest that has his Adventurer's Badge in the shape of a fist on his right side of his vest and has the word "Funky Monkey" on the left pocket, a red tank top with a skull and his name on the bottom. He sports a pair of black pants and light brown high-calf boots. He also wears many accessories that includes earings, a hair piece with skulls, and the seal that Siva used to seal away his real form.

In his true form, Keel is an abnormally large, extremely muscular Dragon Ape with orange-colored scales, sharp teeth, and has curved horns coming out of his elbows.

At the end of the manga, due to Diabolo's curse being removed from him thanks to Lavie using her Divine Ballad: Holy Ray spell, he is turned into a Monkey Tail. His appearance is similar to his human form, but he now has a monkey tail protruding from his tailbone.

Since Keel is a Dragon Ape, his instinct and behavior are similar to that of wild animals. Keel loves to fight and often gets into fights with Blue. Keel seems to be quite egocentric as when he met Crem he insisted on being called "Keel-sama!" He also seems to disregard logic sometimes. For example, when T-Ross said that Keel's brothers were now Ross's hostages, Keel said that if Ross just released them then everything will be resolved. In spite of his attitude, Keel does care deeply for his friends and family and will become enraged when they are in danger.

Immense Strength: Even in his human form, Keel is strong enough to bend a metal lamp post and shatter and stone statue with his bare hands. He uses both hands in the first issue. When his Dragon Ape Arm is awakened it is further enhanced to tremendous levels.

Immense Endurance: Keel has great durability, making him sturdy enough to shrug off things that would kill a normal human. When he manifest his arm he grows far stronger, the arm is large and durable enough to act as a shield.

Immense Speed: Keel possesses great speed closing large gaps in an instant. Upon acquiring his tail his speed is now at supersonic levels.

Master Hand to Hand Combatant: As a Fighter, Keel is skilled with hand to hand combat. He has shown to be capable of taking on multiple opponents single-handed.

The arm's weight throws off his balance and slows him down. He has somewhat adjusted to the balance issue through training. But his teacher has said that Keel is weaker now with the arm then he was when she first trained him without it. The addition of the tail also acts as a speed booster. Keel is now a level 10 Adventurer.

Keel was an orphaned Dragon Ape who was taken in by a woman named Lily. He became adopted brothers with Kikazaru, Iwazaru, Mizaru. Keel later found out that she was going to sell them to slavery. But she ended up liking them, but she couldn't betray the organization so she killed herself. Just then Keels brothers came in and thought he killed her. Keel couldn't let them know the truth so he let them think he killed her.

3 years before the current story line Keel was forced into a human form by Siva.

When Keel first enters the town looking for Siva he begins by destroying the statue of him that commemorates his defeat over Keel. His search through the town eventually leads him to Lavi. After having a disagreement over monster users using monsters to fight they are interrupted by a group of Lizard Men attacking the town. After finding out that Siva has been missing he takes out his anger on the monsters. Keel and Lavi team up with some other Adventurers to defeat the boss of the Lizard Men that gave them orders. After the boss

reveals himself to be a King Lizard Keel tries to attack him, but fails. The other adventurers flee and when Lavi protects Mippy from an attack Keel decides to help he. He then uses the contract rings along with Lavi's music to restore his right arm to its original Dragon Ape form After revealing that he was originally a Dragon Ape he goes on to defeat the King Lizard. Later he learns that Lavi was Siva's disciple. They decide to form a party because Keel says he doesn't have anything better to do.

At the carriage station while waiting for a carriage to Shiton they meet Blue. The carriage is attacked by ogres, but the carriage continues to move causing Blue motion sickness to return until Keel destroys the carriage. When Lavi is about to be attacked by an Ogre Blue defends her to give Keel an opening to defeat it.

Before arriving in the town of Shiton Blue learns of Keel's condition. Once they enter the city Blue splits up from them. They later meet Blue again in the sewer where he was looking for the treasure so Gomeji would provide him with information. They are then attacked by the monster Anaconda. Keel and Blue defeat it so Gomeji can recover his treasure from inside its stomach.

In the Remains of the Adams Lords[]

After being praised for his ability by the workers Blue agrees to form a party with Keel and Lavi who just recently formed Buster Keel. They were hired by Thomas to get the proof of lordship in the Adam's town's remains so he can become the next head of the Adam's Family instead of Charles. After entering the old town and defeating some weak monsters, Keel is able to defeat the Guardian, but Charles steals the proof. Vamper and Toutan arrive and say that they are going to take it.

While Blue fights Vamper he tells him that they are looking for the Sacred Tresures. Meanwhile Keel squares off against Toutan. Toutan puts up a good fight but is defeated by Keel's Burst Fang. Vamper shows up to fight Keel, but Blue then transforms to beat him.

After Blue beats Vamper, he tells them that there group is called Ayakashi. Thomas then gets the proof of lordship, Thus compleateing the groups first quest as a team.

The group goes to ask Gomeji if he knows anything on the Ayakashi, but he doesnt. Blue then decides to go look for the sacred tresures himself, but Keel convinces him to stay and they add Blues name to the team. As a result of the mission Keel went from a level 0 to a level 10. Buster Keel goes to Sunshine City to find Shiro . As they arrive in Sunshine City Lavi is attacked by a monster user named Steel. A old man shows up and they run away, Keel then ask the man who he is only to find out that its Shiro.

While at a town Keel and co. are attacked by Oliqueen Yanxes. All of a sudden she is defeated by two unknown adventures. The two introduce themselves as Albra and Yanxes. Lavi explains that they are powerful, Keel starts getting annoyed so he leaves. While wondering the town he notices a girl being attacked. After saving her she tells him her name is Crem. After talking to her they get something to eat Keel tells her that he is a monster, to which she says that he could never be a monster to her. Crem states that she has to go. Once Keel returns he decides to join Albra and Yanxes on the mission. They explain that they are going to kill a monster named The Bird of Paradise that has been poisoning a hot spring.

After fighting the Bird of Paradise, Keel realizes that the Bird seems familiar, so he decides that he is joining the Bird's side. All of a sudden The Bird of Paradise reveals herself as Crem. Keel then explains that it is Albra and Yanxes that are poisoning the hot springs. Albra then takes out a gourd that sucks up Keel and Lavi spirits. While inside the Gourd Lavi appears naked, a monster named Soul Eater appears and tells her that

your spirit takes the form of when you are born (which means no clothes or weapons). Keel then appears in his true Dragon Ape form and easily beats Soul Eater and escapes the Gourd. Keel and Blue then start fighting against Albra and Yanxes. After Keel and Blue start getting the upper hand, Albra and Yanxes reveal themselves as Gold and Silver. 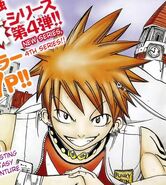 Trivia+ Tropes that apply to him.[]