H. Rouge is an elderly and lean man. He has a long white mustache and beard reaching his stomach with short white hair cut. He has multiple wrinlkes and a long pointy nose.

His attire resembles that of a pope. He has on a black mitre with gold endorsed around the edges and a decorative golden cross in the front. He wears a blue overcoat beneath a der fanon. 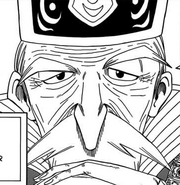 H. Rouge seems to be a very calm and gentle person. When Sarah arrived at the meeting she said that she would kick his ass if the meeting was pointless. He merely replied that it was important they met and that she take a seat. He has shown to have a serious side to him though when he mentioned that they should prepare for the oncoming Shikyou War.

Before the story line he became an adventurer and eventually became the leader of the Seven.

He along with the Seven met to talk about the a possible second Shikyou War and that they should be ready when the time comes.

So far he has not demonstrated any abilities whatsoever. However, seeing how he is the leader of the Seven, a group of the strongest Adventurers, it is safe to assume that he is extremely powerful. Judging from his look his powers may involve with something that has to do with healing or light.