Gyuumaou is one of the Shikyou and the leader of Behemoth. His name is T. Ross, the Gyuumaou.

Gyuumaou is a large cow like monster. He has a nose ring, earring, and a tattoo on his face. He wears a white tank top with a cow like logo on it. He also wears black and white pants which is in a cow pattern.

Gyuumaou is seen as a high and mighty character who does what he sees fit. He has been shown to be proud of his strength mentioning that he went easy on Keel as a child when Keel attacked his entire family. Another moment of his personality was when he was willing to take in Keel as his subordinate, despite the bad history between the pair.

However, Gyuumaou does have a tendency to be very wrathful when he feels he's being treated like a fool. When Keel wanted him to just nonchalantly release his brothers, Gyuumaou took it as offense and was willing to battle it out to make sure Keel knew his place. He also has a rather strong thirst for battle as when he lost his horn against the Buster Keel Party along with Keel's brother, Gyuumaou was excited in the fight.

Despite this, Gyuumaou can still be level-headed when needed as when he decided to let Keel go instead of punishing him for destroying his Sealing Object. Gyuumaou has a rather strict father-like demeanor with some of the Behemoth members.

He seems to have a penchant for those who're able to catch his interest such as Keel.

Before the start of the series Gyuumaou along with the Shikyou caused the Shikyou War and somehow lost in the war. Later he started his own group known as Behemoth and resorted to underworld works. Eventually he meets Keel, a young dragon-ape, who has a vendetta against him for placing his surrogate mother, Lily, in a situation where death was only the way out. Gyuumaou defeated him and sometime later recruited his younger brothers into Behemoth.

It is during the present, when Keel meets his brothers again, that Gyuumaou once again meets Keel. During their reunion Gyuumaou shows that Keel's brothers are now under his control and that he would release them only if Keel takes their place. Keel naively answers he just give him the ring that could release them causing Gyuumaou to be angry and resulting into a clash between the Buster Keel party and him. During the ensuing battle Keel manages to steel the ring and destroys thus releasing his brothers. Gyuumaou in a fit of rage begins to grow in size and outmatches the group for a while only for a quick comeback from the party resulting in Gyuumaou losing one of his horn. The group seemingly believes they win after seeing him revert to his original size only to realize that Gyuumaou is actually invigorated and tempted to keep on battling the already exhausted group. Suddenly, Behemoth executives come and are their to help Gyuumaou defeat them. Just as the group is about to be over powered Gyuumaou stops them telling them he doesn't want to fight anymore.

Thus far the only power he has shown is massive brute strength and endurance. He was able to withstand Keel's Dragon Ape Arm without visible effect and then overpower him effortlessly. He also had a magic charm that allowed him to kill anyone with his symbol tattooed on them but Keel stole it. He was also able to cause a rather large crater within his normal form sending trees away and destroying the landscape.

Gyuumao has also shown the ability to increase his body mass by focusing some sort of power from his horns. With this he gains increased strength and is able to make a large explosion with just a single attack. However, his horns are his weak point as removing one of them with significant force cancels this power.

Gyuumao can also shoot a laser like energy blast by flexing his entire body into his mouth, capable of incredible destruction. This is quite possibly his strongest attacks. Gyuumao has great reflexes, able to keep up with Keel even with his tail summoned into battle which Keel commented on as "faster than sound". 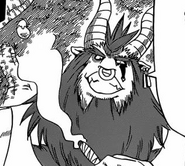