Dragon Ape Arm is Keel's first body enhancement after becoming his human form in which Keel's right arm returns back into a Dragon Ape Arm. Keel can release bursts of explosive force from the scales of his arm. Small bursts can increase the damage of his punches and can be rapid fired. Larger burst can propel his entire body effectively flying. Keel calls this ability "engine". His already incredible strength also increases tremendously in his right arm.

The weight of Keel's arm throws off his balance though this seems to have been remedied through his training at Sarah's island. Also his lighter human body makes his engine techniques less effective. When using engine for movement he must first point his arm in the direction he wishes to go and can only travel in straight lines making it easy to predict his movement. 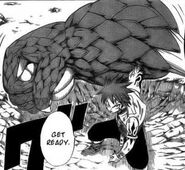 Add a photo to this gallery
Retrieved from "https://busterkeel.fandom.com/wiki/Dragon_Ape_Arm?oldid=6731"
Community content is available under CC-BY-SA unless otherwise noted.