Blue is the tritagonist of Buster Keel. He is an Adventurer, Magic Warrior, and a member of Buster Keel alongside Keel and Lavi while looking for revenge against Kurokiri Setsuna.

While in his human form he has black hair, dark colored eyes, and rounded ears.

When he transforms into his monster form his hair becomes lighter until it is gray. His ears become pointed and his eyes turn light blue. The biggest change are the markings he has on his face, over his cheeks, nose, and forehead.

He is calm, cool, and distant. He is proud and can be manipulated rather easily by questioning his courage or ablities. Which is how he was convinced to join Buster Keel in the first place.

Before he became an adventurer, he was apart of the Suiki clan. A race of water monsters similar to Kappas. Here, he lived happily with his mother, who had seemed to be the leader of the Suiki, and tribesman. However, all of this changed when Kurokiri Setsuna came to the village and supposedly wiped out the Suiki race along with Blue's mother. After this he decided to avenge his mother and race.

Blue first meets Lavi and Keel at the carriage station while waiting for a carriage to Shiton. While riding the carriage he gets motion sickness and is confrontational towards Keel and Lavi. The carriage is attacked by ogres and Blue retaliates, but the carriage continues to move causing his motion sickness to return until Keel destroys the carriage. When Lavi is about to be attacked by an Ogre he defends her to give Keel an opening to defeat it. Before arriving in the town of Shiton he learns of Keel's condition. Once they enter the city, Blue splits up from them.

Blue then later meets them again in the sewers where he was looking for the treasure so Gomeji would provide him with information. They are then attacked by the monster, Anaconda. Blue and Keel defeat it so Gomeji can recover his treasure from inside its stomach. After returning to the surface they go to the bath where Gomeji gives him the information that he wants.

He later then goes to the branch of the Adventurer's Guild in Shiton for work to do. After being praised for his ability by the workers, he agrees to form a party with Keel and Lavi. They were hired by Thomas to get the proof of lordship in the Adam's town's remains so he can become the next head of the Adam's Family instead of Charles. After entering the old town and defeating some weak monsters, Keel is able to defeat the Guardian, but Charles steals the proof. Banpaa and Toutan arrive and say that they are going to take it.

Master Swordsman: As a magic warrior, Blue is skilled with both magic and weapons. His magic centers around the manipulation of water for both offense and defense. His overall ability is roughly equal to Keel's, but slightly more strategic. He uses the Water Moon to attack.

blade. Water can be used to extend the range of the blade and increase its strength. 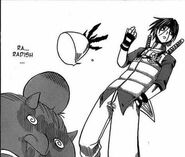 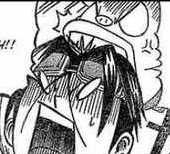 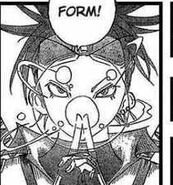